Pick Yourself Up is the July 6, 2016 sophomore solo album by Los Angeles, California artist Jeff Hyman.  He is joined on the album by a large number of guest artists such as Smith Sisters Bluegrass, Tom Pritchard, Grant Maloy Smith, and so many others as this album is a mix of Americana, bluegrass, gospel, jazz, blues and country on such tracks as I’ll Fly Away, Scotch And Soda, Ain’t Hurtin Nobody, a cover of Garth Brooks classic The Dance, the title track Pick Yourself Up (written by Mary K Burke), Hearts Of Palm and much more plus Yellow Moon (featuring Laura Ainsworth).  This album with amazing vocals and instrumentation was well performed and recorded.  You can get your own copy of this release from Amazon, Bandcamp, CD Baby and other outlets where CDs and digital downloads are sold.  You can learn more about this artist and his music by going to his website http://www.jeffhymanmusic.com 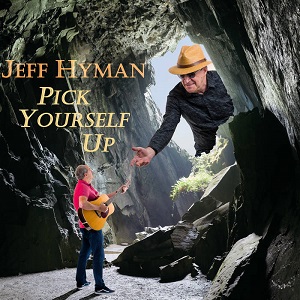